I love the stage Levi’s in right now! There’s so much to say, so I’ll get right to it.

This month we brought Levi to a lot of event’s, plus we spent so much family time together. It was amazing, and I’m so happy thinking back on these times. Let me share what we did below!

On August 3rd, Lance and I took Levi to the Lake Placid beach. We set up a blanket under a tree for some shade and headed over to the playground. We set Levi in a baby swing and started pushing him. He made the cutest noise I’ve ever heard. He LOVED it! He really couldn’t get enough  and kept making this cute noise over and over again whenever we pushed him. All I can describe it as is how you get this rush from being on the swings and that feeling you get every time you go up towards the sky. Now the swings have become a regular thing for us to do. We actually had a play date later on in August with some friends at the Keene playground, so I have a feeling we’ll be spending lots of time there!

We went to the Annual Keene Valley Fire Department Field Day and had so much fun. Lance signed up for the relay race between Keene and Keene Valley’s Fire Departments. Levi and I sat on the sidelines watching Lance participate, and Keene Fire Department ended up winning the relay! It was fun to see everyone get dressed in their fire gear and then run the relay. We saw a lot of people there we haven’t seen in a while, and then had their famous BBQ chicken dinner which we love! We brought Levi’s seat and purees with us, so we could all eat dinner together.

One weekend Lance dropped Levi and I off at the Lake Placid Library while he headed to Price Chopper to go grocery shopping. Even though I’ve been to this library hundred’s of times (I feel like it was my second home when I lived in Lake Placid) I didn’t realized the extent of their children’s section. Never having reason to go in this section before, I had no idea all that it offered. One full floor is dedicated to the children’s section, and it’s filled with comfy seating, tables and chairs, huge bean bags, kid puzzles, lots of books, blocks, games, and so much more. We had a blast! I made Lance come in after he was done grocery shopping to show him. The library also has a lot of events going on, but they are mostly during the week. I still want to be on the lookout for any events that are during the weekends. I can’t wait to bring Levi to the library more. It will be such a good thing to do in the winter for us. Lance said the library’s more my thing, which truthfully it is. haha So when Lance has to work overtime in the winter plowing, I’ll bundle Levi up to head there, and we’ll spend a couple of hours outside the house.

Lance’s dad’s side of the family had a mini family reunion, so we decided to go. The reunion was located in the same town we live in, so it was really convenient. I’m so glad we ended up going because Levi has 2 other cousin’s that are all the same age as Levi (only 2 weeks apart). We sat all of them down on the couch, the girl being in the middle, then Levi and the other boy cousin on each side of her. Immediately Levi and the other boy cousin put their hands on the girls shoulders. It was SO cute!!! We all got pictures. Then what was even funnier is that they started putting their little hands into each other’s mouths. We were all laughing so hard! I’m glad I got pictures of it, and hopefully we can see Levi’s cousins more often even though they live far away! 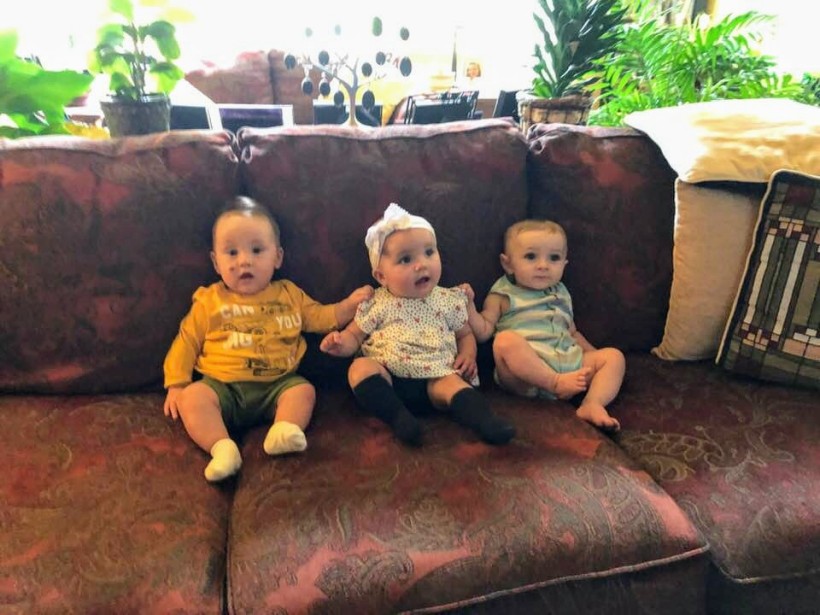 Levi’s development has soared this last month. He is sitting up unassisted now. We used to spot him when he was still wobbling a bit, but now we just lay a blanket behind him in-case he does have a random fall backwards. He gives kisses when you ask him for one, and by kiss he opens his mouth wide and leans in. lol At exactly 7 months (August 27) he said Dada. Lance and I looked at each other like “What did he just say?” lol We’ve noticed he’s been showing signs of crawling – getting up on all 4’s and crawling a little bit backwards. I still feel like we have a while to go for that though. Levi’s been holding up his arms to us when he wants to be picked up. It’s so cute and makes me so happy to see all of these developments and milestones.

A few other things – Levi LOVES riding on Dada’s shoulders, and he holds on by tugging on Lance’s ears. haha!! That cracked us right up. He also drools on dad’s head. lol Levi has been teething constantly the last month. He finally has 1 tiny tooth about at the gum line we can see. I’m hoping he gets the other bottom tooth and his top teeth soon! Teething hasn’t been fun, manageable (at times) but not fun for all of us. He still isn’t completely sleeping through the night yet. He’s getting up once at night for a feeding but it will only be a 2-4 oz bottle. I feel he is getting plenty of solids and formula during the day, so we may have to do something about that soon? I’ll have to ask at our next doctor’s visit.

I feel Levi’s a lot more aware of things now. It’s so much fun watching and seeing everything he’s learning and exploring along the way. 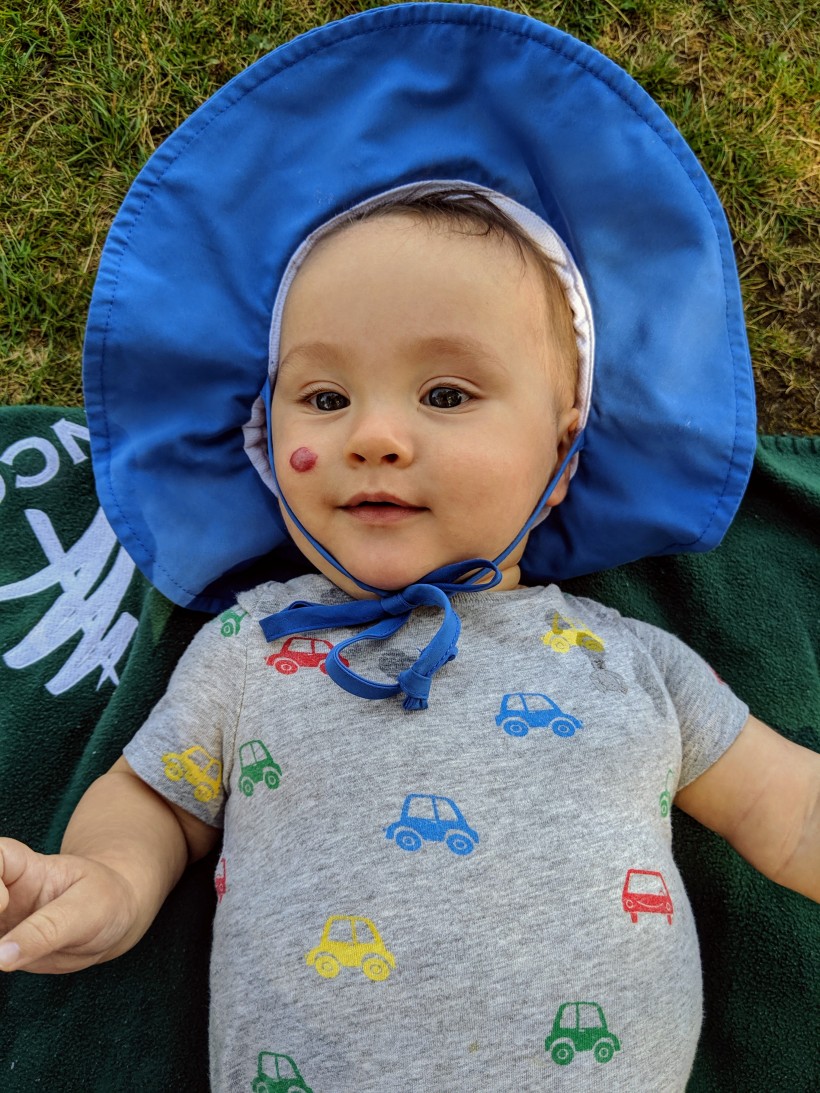 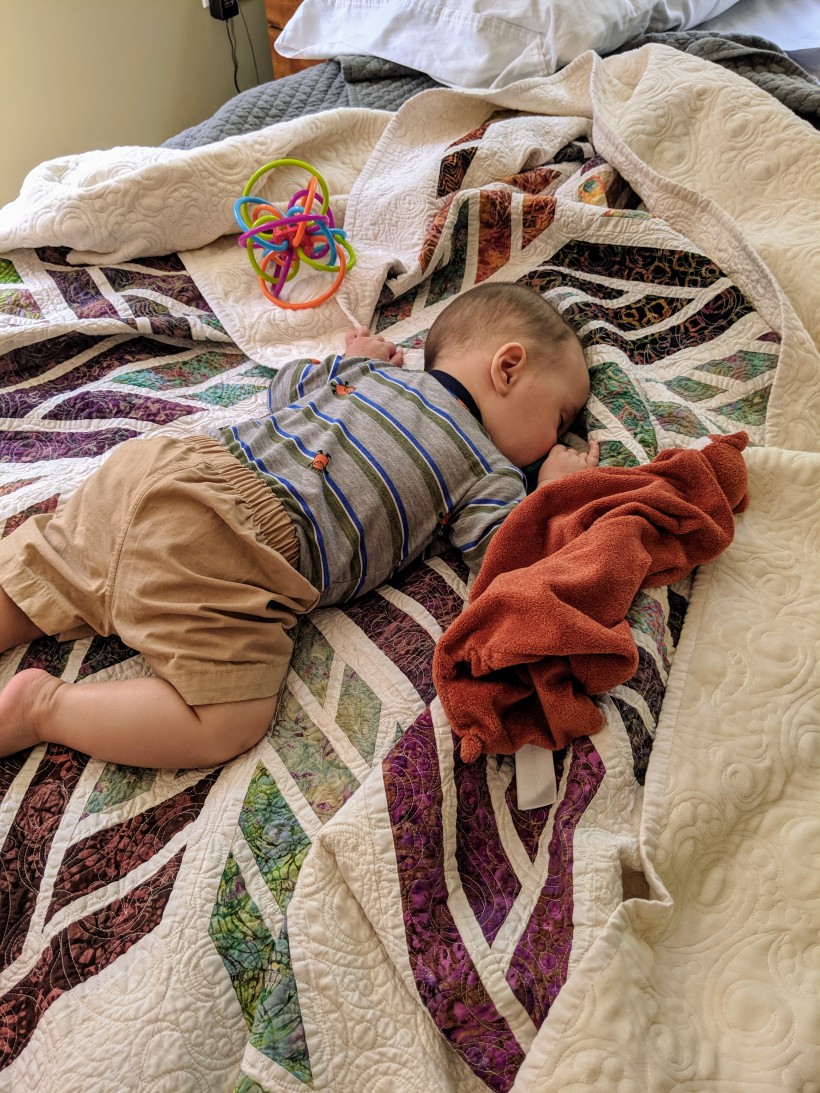 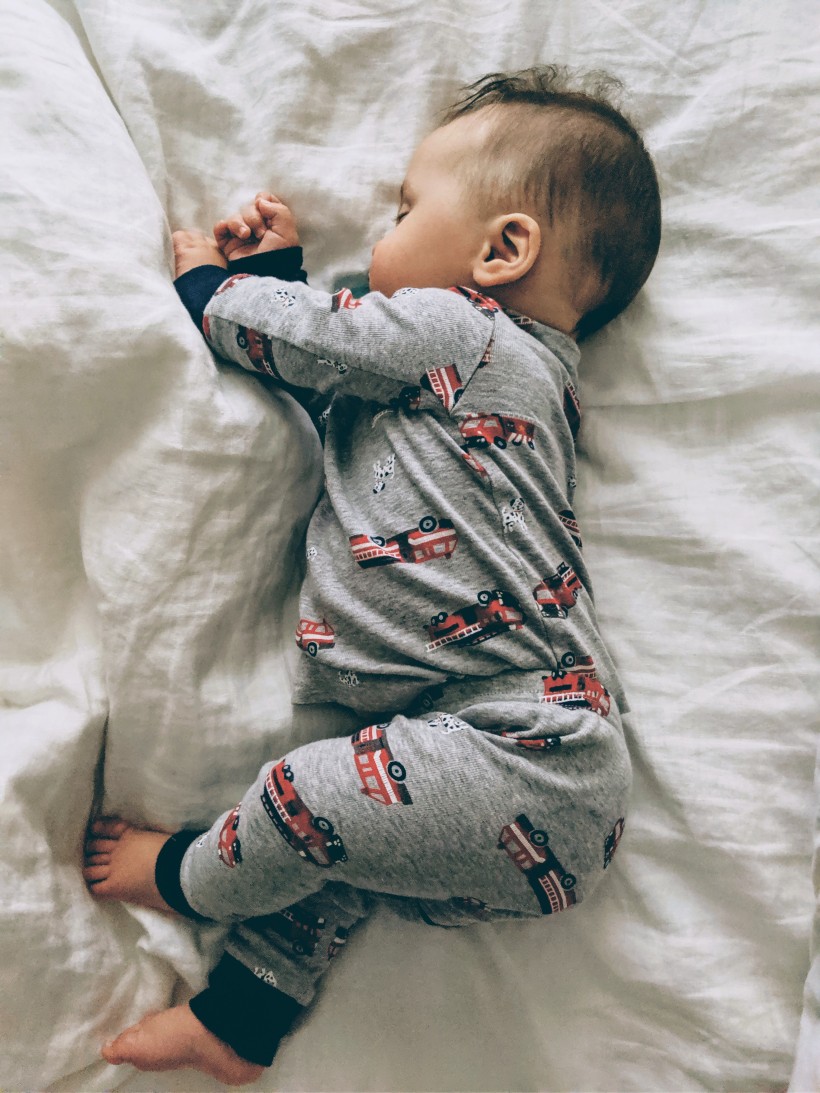 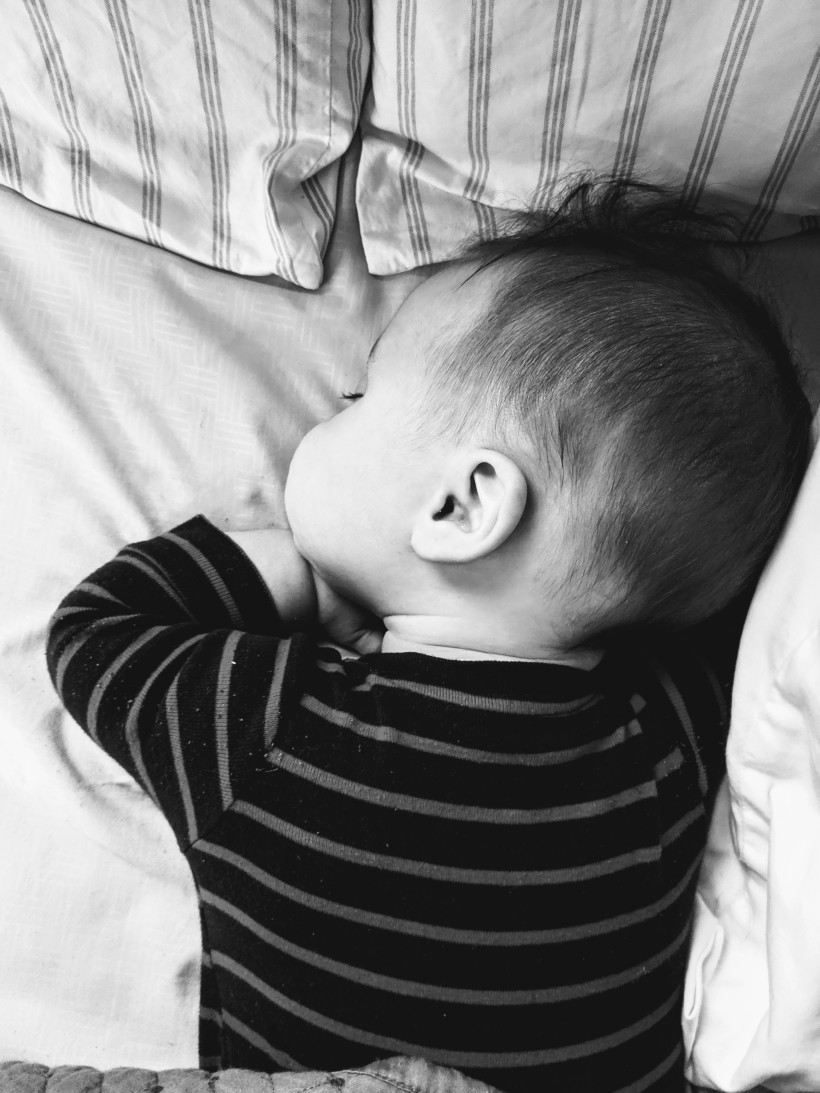 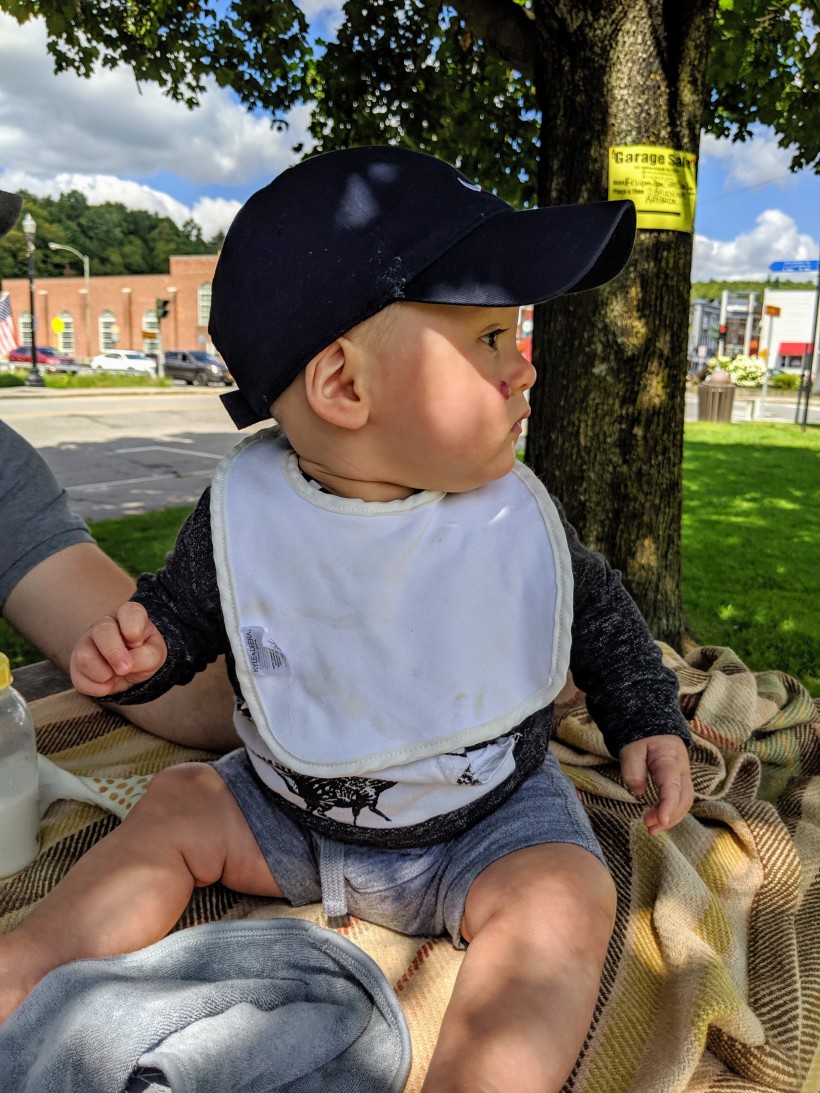 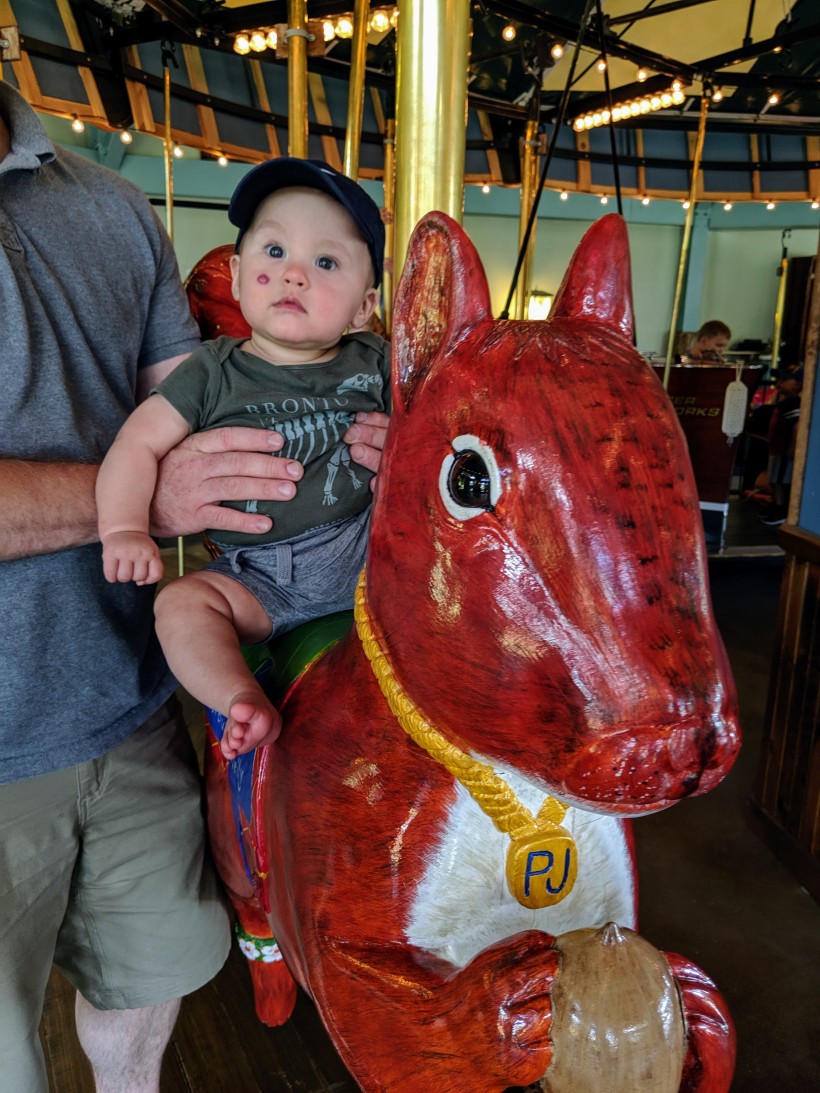 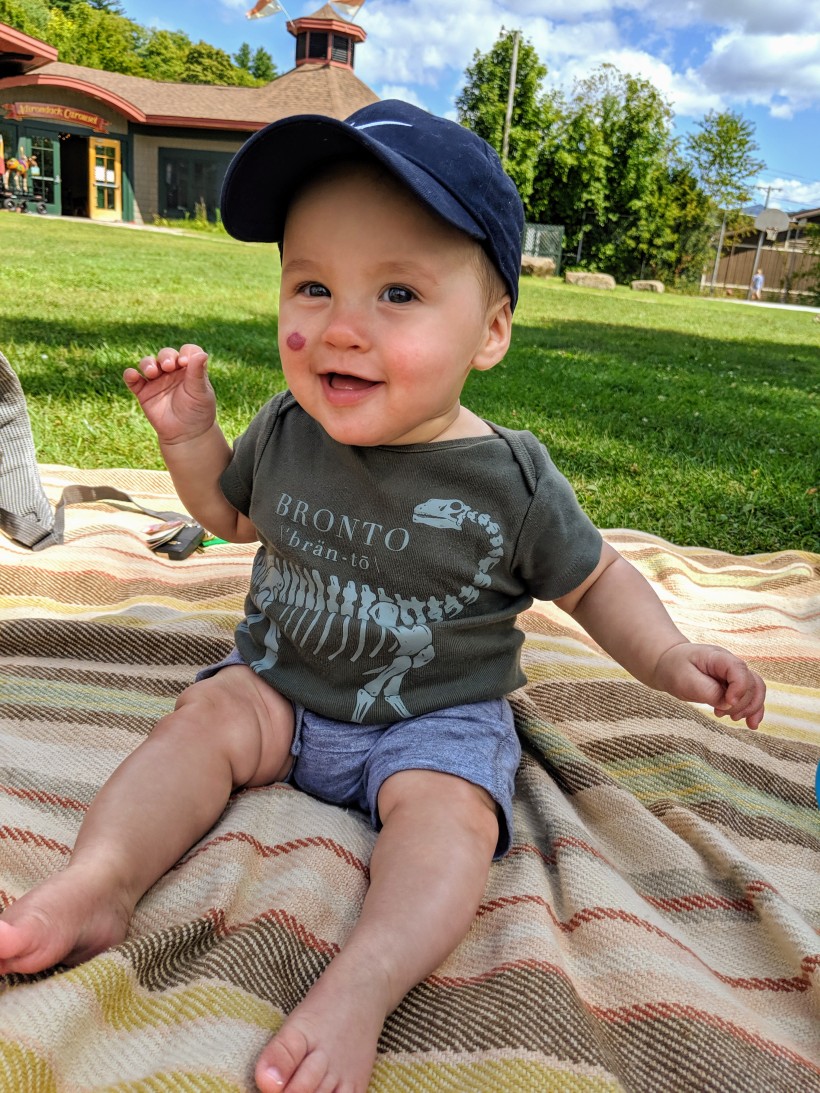