This pregnancy has flown by so far! I’m already 22 weeks along, so I wanted to start documenting it before it’s over. My friend Megan took these pictures when Lance and I first found out I was pregnant. I’m so glad she was able to capture this sweet moment for us.

This pregnancy has flown by so far. I’m already 22 weeks along, so I wanted to start documenting it before it’s over. My friend Megan took these pictures when Lance and I first found out I was pregnant. Megan was one of the first people to know, and I’m so glad she was able to capture this sweet moment for us. For our wedding favors we gave our parents and siblings frames, and the idea was to give them a picture from the wedding once we got our photos back from the photographer. However, instead of leaving the frames empty, we filled them with a picture of Lance and I announcing our pregnancy. We gave them the frames before the wedding since we were so excited to share the news with them. The reactions we received from our family members were priceless, and it has been one of the best parts of my pregnancy so far! 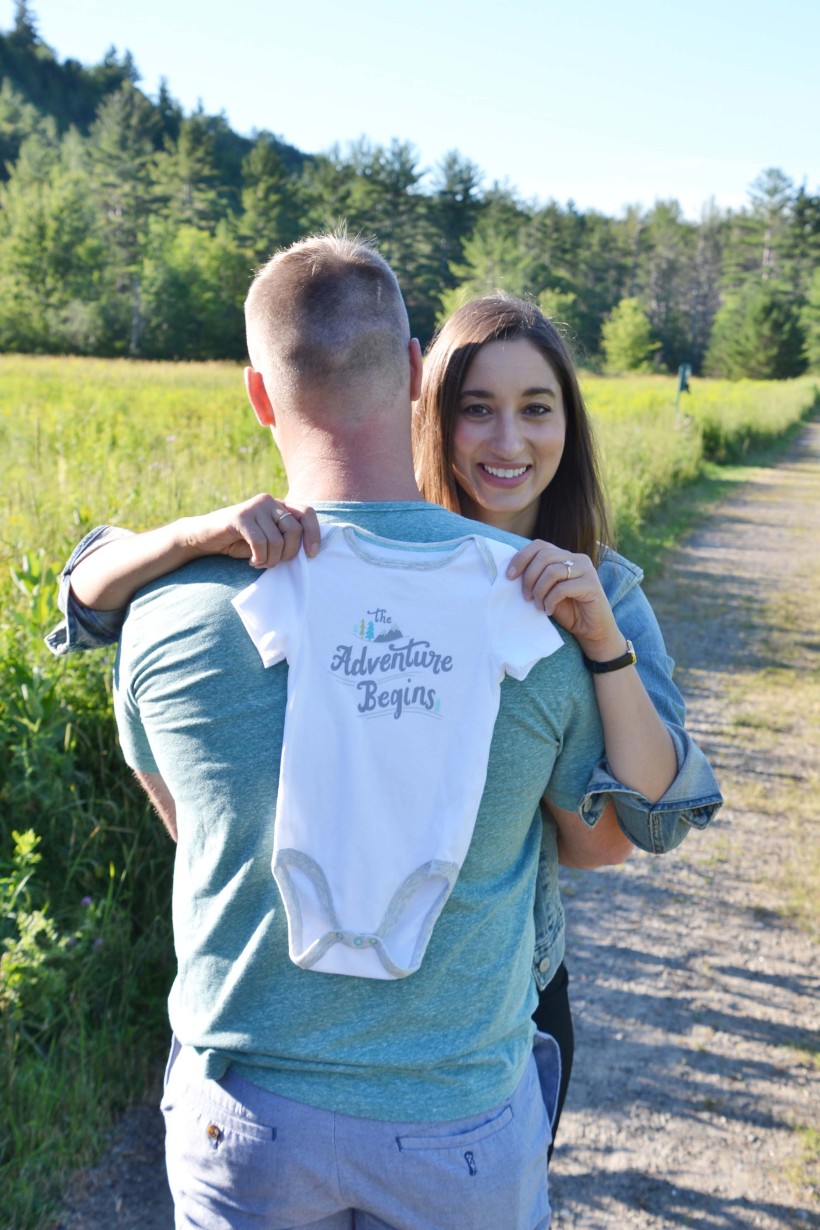 How Lance and I Found Out The Big News!

Lance and I decided we would start trying around June, both thinking it would take at least a couple of months for me to get pregnant. We thought possibly around the wedding I would be pregnant, but that definitely wasn’t the case. I was lucky to get pregnant very quick, within the first month, which I was surprised about! Back in June when I thought I may be pregnant, I bought a pregnancy test without telling Lance. Thinking if it was negative I wasn’t going to say anything to him. It was negative, and I told him anyways. haha It turns out it was just too early to take the pregnancy test. I felt symptoms all month long, and then when July came around I took another pregnancy test. Lance was there this time. We were getting ready for work, and I went out to the kitchen to wait the 3 minutes while Lance was making his lunch. I was nervously pacing and then when it was time to check we went into the bathroom to look. I had purposely turned the pregnancy test over so the result wasn’t showing. We counted to 3 and flipped it over. Lance said “You’re pregnant!” I was so happy he was there. Oh, and we found out on our 2nd dating anniversary – July 8th!

How I Felt: Exhausted!! I literally couldn’t believe how tired I was. I remember some days almost wanting to fall asleep at my desk at my work. I was so drained and didn’t have any energy. Although being tired all the time, luckily, I wasn’t sick. Sometimes I felt nauseous, but I never threw up. The first trimester flew by, partly because we had our first appointment on July 18th (my older sister’s birthday) and I was already 7 1/2 weeks pregnant. The hardest part was keeping this a secret from our family member’s until close to the wedding – which was a month away on August 18. Lance and I told our parents (by giving them the frames) by the end of July, but I wanted to tell my sister’s in person as well, so I had to wait a few weeks until they came up for the wedding. That was hard but it was worth the wait to see their reactions. Emily’s jaw dropped and Chira teared up!

What I Was Craving: Nothing really! What was weird for me was my desire to cook became non-existent. I cook all the time, absolutely love to cook, and during the first trimester I didn’t want to at all. It was probably because of the nausea, but I’m making up for that now in my 2nd trimester!

What I Was Reading: Honestly, I wasn’t reading much at the time. The wedding and honeymoon were taking up a ton of my time with last minute details plus getting ready for my family to arrive. My mom, twin sister and I were heading to Quebec City the weekend before my wedding, so I was getting ready for that too. There was a lot going on, but I knew once the wedding and honeymoon were over, it was full on baby mode.

What I Was Most Excited About: The first sonogram! I was really nervous about having a miscarriage or having something go wrong in the first trimester that I knew once we had our first sonogram I would be a lot more relieved! We got to find out our due date, which is funny, because when Megan took our announcement photos for our family, Lance and I weren’t sure if we were going to have a February or March baby. Our due date is February 28th, the last day of the month! Luckily, next year isn’t a leap year!  Also, our due date is 2 days after my birthday.

What I Was Thinking About: Are we having twins?!?! Lance and I thought from the very beginning we wouldn’t have twins, but since we are both twins, the possibility of having twins is more likely?! Twins don’t run in Lance’s family, but they run in mine. Our doctor confirmed we are just having one – which we both are so happy about! hahah

One thought on “My First Trimester”